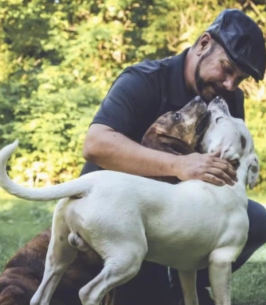 Theodore, Ted, Uncle Ted, Tedith, Theo, Teddy Bear, Teddy Joe, whatever you liked to call him, left our world on November 3, 2021 to haunt us for all of eternity.

He left behind a cabin full of crap his family doesn’t know what to do with and his three beautiful dogs, Stewart, Stella and Stormy.

Along with his three dogs that meant everything to him, Ted also left behind his big brother and best friend, Tim Snyder (Tammy Furlong), his favorite sister Lisa Snyder, nieces Holly Fodora (Aaron), Angela Behling (Jeff StOnge), and Amy Sutliff (Chris) and a slew of children that thankfully were not his own, but he loved to be their Uncle Ted. Iann, Abigail, Jetta, Kenzie, Tessa, Anna, Maddie and Brandon. Ted also had many great friends including two that will forever be a part of our family, Jo Meek and Staci Cleveland.

He is predeceased by his parents, Fred and Jan Snyder and also by his first true love, his dog Bailey.

He coined himself a horror movie critic, and introduced all of his nieces and nephew to them while they were way too young, but of course they loved every minute of it.

He was in the local music scene for years, playing bass in many 80’s hard rock bands with his brother Tim on the drums, such as, Sideshow, Loose Cannon and most recently, Stranger Danger.

Along side his brother Tim, he was the second half of Snyder Brothers Lawncare for the past three years. He was classically trained with a weed eater and could power wash and stain a big deck like nobody’s business.

Ted was also one hell of a writer. He hated bad grammar and lack of punctuation, and he wasn’t afraid to call you out on it either. He was a former staff writer for IHeartOswego and a blogger for Fuze magazine.

You may have seen Ted around and thought he was a pretty creepy dude, and you’d be right, but he was everyone’s favorite creepy dude. On the outside, he always seemed pretty annoyed with everyone, but for those of us that knew him, we know that’s just how he showed us love. Ted was always the life of the party, with his quick wit, and insanely inappropriate jokes he always had everyone in a fit of tears from laughing so hard.

He did have one big weakness though, he was a big softie for his dogs. He would even take them for their daily walk after getting home from a gig at 3am. At the end of the day, there was nothing he would rather do than sit in his creepy cabin in the woods cuddling with his dogs, enjoying a brew and a bad horror movie.

Although losing Ted has left a huge hole in all of our hearts, at least his dream of getting sponge baths from nurses came true.

In celebration of Ted’s life, please raise a glass of your favorite beverage with us and “bang your head” one last time.

To leave a special memory or condolences for Ted's family, please click the Condolences & Tributes button above.

To send flowers to the family of Theodore J. Snyder, please visit our Heartfelt Sympathies Store.