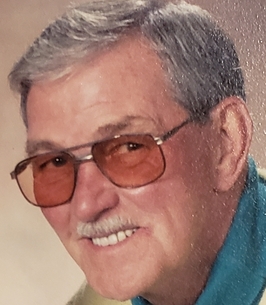 Raymond Karl Wideman was born March 10,1925 to Edmund H. and Bella (Nelson) Wideman. He was born in Detroit Michigan and later the family moved to Dayton, Ohio. Ray played Elite fast pitch softball, loved to bowl and golf. He took great pride in the vehicles he owned and loved his vanity license plate “QWX”. He could be seen driving around Middletown, Ohio in his convertible soaking up the sun. Ray loved stock car races as well. Ray proudly served in the military in Germany during WW2

After serving in the military, Ray followed in his father and grandfather’s footsteps and worked at Aeronca Aircraft in Middletown where many types of general aviation aircraft were made. After leaving there he was employed at Black Clawson as a Sales Representative where they manufactured paper machines. Ray transferred to the plant in New York where he met his soul mate, Beverley Raponi. Enjoying life with Beverley was a dream for Ray and he was “Daddy” to their many horses and dogs. Ray loved all his pets and was usually found with one napping in his lap. He also loved traveling with Beverley and their show horses. In later years, Ray could be found hanging out at the Hannibal Quick Mart with Susie and her family.

Funeral Services will be private. Arrangements are in care of the Harter Funeral Home, Inc. Mexico, NY.

To send flowers to the family of Raymond Karl Wideman, please visit our Heartfelt Sympathies Store.