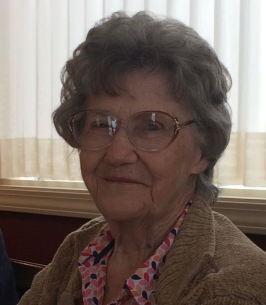 Obituary for Alberta I. Clark

Born in Oswego, NY, she was the daughter of late David H. and Lillian G. (DeGroff) Curran. Alberta married her husband of 65 years, the late Clifford P. Clark, on April 19, 1947, immediately settling down and beginning their large family. She devoted her life to her children and husband, remaining a homemaker until the children were grown. She then worked for many years as a lunch aide for the Oswego City School District until her retirement.

Alberta loved to sing! She was an active member of the Trinity United Methodist Church for over 90 years, where she was a long-time soprano in the choir. She also sang as a member of the Oswego High School alumni group, The Philomelians.

She also was a member of several organizations and clubs including the Eastern Stars Lodge #127 and the Hannibal Whips CB Club and volunteered with the VFW Post #5380 in Hannibal, NY and the Retired & Senior Volunteer Program (RSVP).

She was pre-deceased by her husband, Clifford, a daughter, Betsy, three sisters, Shirley, Marge and Jeanette and a brother, Henry (Bud).

Family and friends may pay their respects on Thursday, September 2, 2021 at the Harter Funeral Home, Inc. (9 Washington Ave. Mexico, New York) from 4:00pm to 7:00pm. The funeral services will be held on Friday, September 3, 2021, at Trinity United Methodist Church (45 East 4th Street, Oswego, New York) at 11:00am with burial services to follow at the North Volney Cemetery.

In lieu of flowers, donations may be made to Trinity United Methodist Church.

To leave a special memory or condolences for Alberta's family, please click the Condolences & Tributes button above.

To send flowers to the family of Alberta I. Clark, please visit our Heartfelt Sympathies Store.