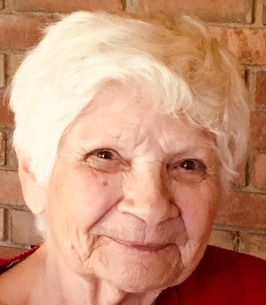 Ruby was born to Joe D. and Donna (Scott) Brents at home on October 2, 1923, in Dell, Arkansas. Over the following years her family moved to nearby Mississippi and Tennessee. Ruby graduated from high school in Woodland, Mississippi where she liked to play basketball. During World War II, she moved to Tennessee and worked in a defense plant making windshields and turrets for bombers and other aircraft. She looked like “Ruby the Riveter” in her factory work attire.

In 1945, she met her future husband, Harold Petrie of Parish, New York. At the time, Harold was an injured Marine at the Memphis Naval Air Station recuperating from injuries sustained at the airfield in Newport, Arkansas. Harold moved back to Parish in 1946, but their romance continued and he travelled to Blytheville, Arkansas, and Memphis, Tennessee, to ask for her hand in marriage. She accepted and they were married August 6, 1948 in Hernando, MIssissippi. They moved to the Petrie homestead on County Route 26 in Parish, which she made a home for 68 years. She worked at General Electric in Liverpool, New York, just after her move.

When the Korean War broke out in June 1950, her husband Harold was recalled to active duty in the Marine Corps and was away for many months. Ruby continued to work, care for their first newborn, and to care for older family members at the homestead. She was a good cook and baker and made tasty meals on short notice when visitors stopped by the homestead. Later, Harold was honorably discharged from the Marine Corps, returned home and resumed work as a mechanic. New children arrived and Ruby enjoyed participating in the Parent Teachers Assocation and was proud of her work to support construction of a new consolidated Altmar-Parish-Williamstown (APW) High School off County Route 22 in Parish in the early 1960s.

Through the years, Ruby worked for Carl F. House and Richard Jenkins Insurance agencies in Parish. She later shifted to retail clothing sales at Fran’s on Main Street in Parish and then worked many years for Casual Corner at the Carousel Center in Syracuse, New York, where she greatly enjoyed helping young women select clothing for their careers and to “Dress for Success.” Ruby enjoyed outings with her husband Harold to outdoor and forestry events of the New York State Forest Owners Assocation and Tug Hill Tomorrow Land Trust. When Harold was catastrophically injured in a forest accident and became a paraplegic, Ruby achieved the necessary certifications and cared for him for nearly 16 years until his passing in 2015. She enjoyed conversations with young people and encouraged them to further their education and to see the world.

She was predeceased by her parents, Joe D. and Donna Brents; her brothers, J.D., Willard, Marvin and Harold Brents and her sisters, Donna Johns and Mary Goodson.

The family expresses their gratitude to the staff of Bishops Commons for the assistance and friendship provided to Ruby during the past three years. Ruby’s children are deeply appreciative of the care and friendship provided by Parish neighbors and friends: Evelyn Stelmashuck, Bonnie and Charlie Stanard, Caryn and Bruce Dennison, Paul Britton and sons Alec and Zack and home caretakers, Victoria Evans and Sam Howard.

The family suggests that memorials for Ruby may be made by planting a tree in her memory for future generations to enjoy or by a contribution to the Parish Public Library or Parish Historical Society, Parish, New York 13131.

Memorial Services will be held at 10 a.m. Saturday, October 12, 2019 at the First United Methodist Church of Parish, Parish, NY; with the Rev. Richard Barling Officiating. Ruby will be buried with her husband, Harold, immediately following the memorial service in Pleasant Lawn Cemetery, Parish, NY. Arrangements are in the Trusted Care of the Harter Funeral Home, Inc. Parish, NY.

To send flowers to the family of Ruby L. Petrie, please visit our Heartfelt Sympathies Store.