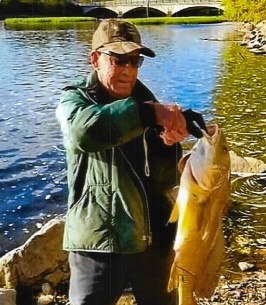 Ray Victor Robbins was born in Ellisburg, New York, on May 7, 1938, the oldest of three children by his fathers first marriage. He had a brother, Ernest and a sister, Betty Jane. He also had three half siblings, Victoria, Michael and Victor Jr. He was an uncle to several nieces and nephews.

He married Sharon Horning in 1959. They had three children, Mark Robbins, Lynn Robbins Boyd and Nancy Robbins Fairchild. He had seven grandchildren and five great-grandchildren.

After graduation, he moved to Syracuse where he met his bride. They moved to Parish in 1965, to the home he built and where they raised their children.

Ray was a hard worker, entering the work force as a teenager, setting bowling pins by hand. Some of his other jobs included, delivering milk for Byrne Dairy, washing cars for National Car Rental and driving for City Linen. He worked for the Town of Parish as a "Wing Man" for Snow Plow Drivers and maintained the Merril Park on Rider Street. He cut and sold fire wood for many years, also cutting and splitting wood for his own personal use late into his 70's. He was a very proud man and couldn't bear to ask for help no matter how big of a job he was doing.

He was an outdoorsman, who loved to hunt. He could spot a woodchuck, 700 yards and three stone walls off the road. He also loved to Squirrel Hunt. He shot the buck of a lifetime, three years ago at age 78. He loved to fish, especially ice fishing. He would go to the Black River, where he grew up, to fish for Pike.

He bowled in a league in Pulaski for many years, earning the nickname LP (Little Pro) and a earned a place in the 700 club.

Although he was small in stature, he could work circles around most men. He inherited his fathers knack for "MacGyvering" things around the house that needed fixing. His famous saying was "good enough for who its for".

He will be missed by all who knew him. His legacy will live on through his children and grandchildren.

To send flowers to the family of Ray V. Robbins, please visit our Heartfelt Sympathies Store.